There is some conflict when looking at PBR at the moment. The charts and oil market fundamentals may not be lining up.

The charts are indicating one of two things: 1. a buying opportunity or 2. the start of a negative trend.

The daily showcases the potential negative trend via the DMI, despite seeing support at current levels. 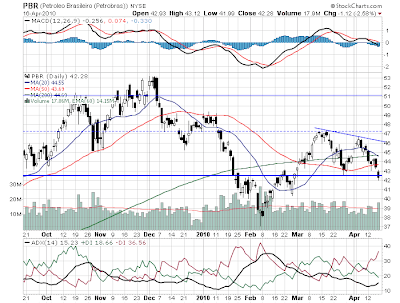 Then there is the weekly chart, which clearly shows PBR tracking the downward slope of the SMAs.

But that is a purely technical perspective. On the flip side, driving season is coming up, on the heals of a recovering economy and labor force. Macro economic conditions suggest crude to rise or at least hold steady in the 80s.

Unless there is some negative backdrop I am not seeing, or the China deal they just announce was really bad news instead of good news, I viewed this set up as a buying opportunity.