A word on IBM

The Fast Money crew was just bashing the hell out of IBM this evening, and I think they are dead wrong. They keep mentioning how expensive it is, compared it to Intel and at one point Guy Adomi mentioned it gets attractive at 120.

I was left scratching my head.

Let me explain... I take in a lot of info to make a decision, and no matter how much I respect the people of the FM show (or anyone for that matter) and the fact that I like the show, I have a shit load of confidence in my ability to make a correct assessment.

I think selling IBM here is completely wrong, and grossly misses what is going on with IBM.

A case for IBM to be viewed as 'expense' is a valid point. Earnings growth was projected to be around 10%, so a low PE is justified. But, and this is the fun part, if we assess what is going on with IBM, it will earn the right to a higher PE. Here is why:

1. They have consistently produced better then expected numbers, growing faster than the projected 10%. All this while we were in the heart of the greatest recession in 80yrs.

3. Due to #2, a slight increase in revenue will be nicely reflected in earnings. (producing a faster earnings growth rate)

4. Spending will pick up in 2010 and beyond toward most, if not all, of IBM's positioned businesses. (This facilitates #2 and 3, which again will facilitate in a faster earnings growth rate)

5. IBM specifically told all of us, in the CC, that they have not seen the benefits from integration yet as the integration was not fully completed. (This increases Gross Margins, and will again facilitate in a faster earnings growth rate.)

If I was actively trading this stock (remember for IBM I did not want to sell it via active trading), my discipline would have triggered a 'sell' before the earnings. The chart indicated an overbought position, and for a name like IBM, chartist can argue it moved too far too fast in one day. 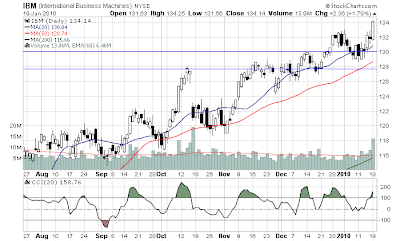 Basically the good folks at Fast Money, and anyone else preaching to sell IBM, after the decline, is doing so due to over extended technicals and after hours action. But it is a mistake to think IBM will keel over, or retest 120, based on the above assessment. Those preaching will be luck if it breaks 130.

But for the pure chartists out there, there is very strong support around 125.
Posted by echotoall at 8:36 PM