I want to short the market so badly, it hurts. But I can not because I do not know which way the dollar is going, and that is the only thing driving the current rally. Instead I am looking to short individual names. MCO (Moody's) being one, and JCG (J. Crew) is a short I plan on taking on. (I took a short on JCG after they reported their earnings, but subsequently covered when it hit my top line consolidation point.)

JCG is very over extended, and it is soo very pricey. I plan on entering the short position in the account where I am long BKE. Basically acting like a pair trade, but will cover JCG when it consolidates. 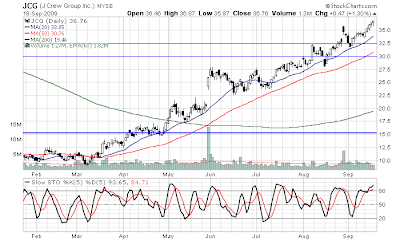 I explained Moody's short the other day, and now it is around a fairly solid support level. It may get a bounce from here, but ultimately I believe it will break down and begin to trade into the teens. (The biz model of this company is fucked when the institutional investors are questioning their existence, not to mention the lawsuits that will take place after the courts ruled they are not protected by the 1st amendment.)

IMO, these are names that will get exaggerated moves to the down side if the market goes down, due to the dollar rising, because individually they are due to go down.
Posted by echotoall at 1:00 PM