'the fear' is a great song by Lilly Allen, and I was singing it as I was watching the market go down...

blah, blah, blah, then chorus... [the market is] being taken over by the feeeeaaaarrrr...

Man-oh-man, was the market scared today. First time throughout this recent rally where the overwhelming majority of commentators I have been seeing, in the vast sites I read, were negative, and telling people to short. Quite fascinating.

The obvious is that the VIX spiked today, and spiked impressively. Today's spike made it overbought, but changes its trend. 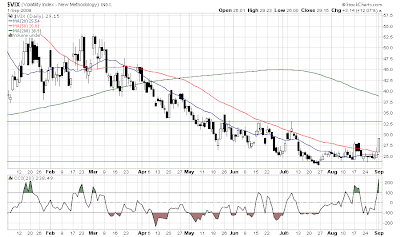 I do not believe the VIX will start an uptrend. I think it will top out at approx. 33, and channel for awhile. Once I see 33 or so, I will go heavy in the stocks listed below.

Such a level of fear would suggest the SP500 could very well retreat to the 62 SMA.

Another aspect of the market not really seen in the above charts, are the internals. Individual stocks are not as oversold as I would expect w/such negativity. Because of this, and the above charts, we will go lower... for now.

Waiting to go heavy into the market via the following: