By and large my trading this past year has been pretty shitty.  Frankly its the shittiest it has been in a number of years.  But over the past two-three months trading has been pretty good, except for two trades, thus far.  One of those trades, at the moment, is QCOM.

With QCOM declining about 10% within a 6 day period (far more than I expected), I find myself having to re-evaluate the trade thesis. 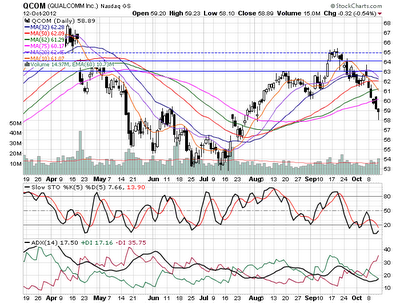 The thesis is simple: the mobile transition. Everyone knows the PC era is rapidly declining, and the post PC computing is/has gained prominence. The best semi positioned to benefit from this shift to mobile is QCOM.

While a 19% expansion is pretty good, the difference is that GOOG and AAPL tested their high-end multiples for the year. QCOM has yet to do this. It has only tested its low-end multiple of its previous trading range.

Considering the fundamentals story of the Post PC world, this makes little sense to me. Especially when this thesis allowed so many other stocks to trade higher (ie MA, EBAY, AMZN etc)

Despite its positioning, QCOM could not escape its sector's poor showing last week. 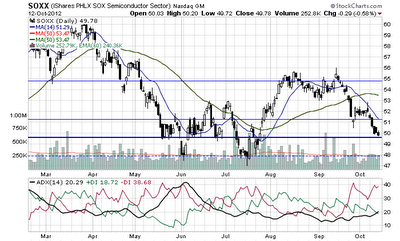 Regardless of sector performance, as of Q2 smartphone growth was pegged around 43%.

As consumers were awaiting the iPhone 5 to be announced, no doubt there was a hiccup to this growth. While we await official Q3 numbers, the indication that growth is currently strong is seen with Freight Cargo rates directly attributed to the iPhone 5 and mobile computing.  (There is still fairly strong international growth expectations, which will most likely target low-end adoption. And with QCOM's expansion of the Snapdragon platform, they look better positioned to ride that growth.)

While the above is taking place, a competitor (Texas Instruments) bowed out of the mobile consumer race. So I am still left scratching my head as to why QCOM is allowed to trade at such a low multiple.

One idea is that while one competitor leaves the race, another strong competitor (Intel) will enter. Intel has made considerable stride getting their mobile chips up to speed to Arm based processors. The most tangible evidence of that is the Motorola RAZR i in everyday test use.

Even though Intel seems to have simply gotten up to speed with respect to performance, they still lack LTE. And LTE compatible chips are not scheduled to enter the mix until 2013.

So is the competition from INTC causing the multiple compression?  A look at Intel's performance would not suggest it. 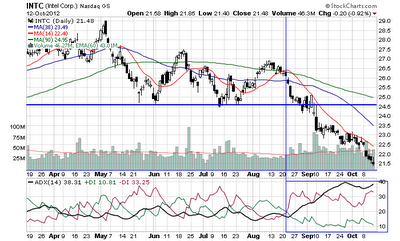 Intel broke down, facilitating the sector's decline, and with a very high degree of negativity. The stock is not suggesting INTC will see tangible inroads into mobile anytime soon. Here is Intel's mobile road map: 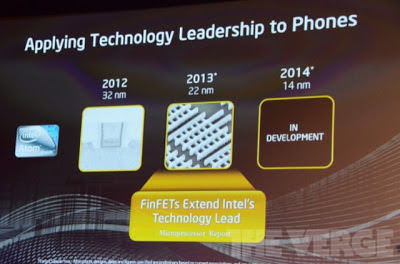 By 2013, Intel plans on getting smaller than the leading processors. But ARM based processors are not standing still. Apple has been looking into a fabrication of a 20nm chip, which would suggest other ARM based chip makers will soon follow.

But regardless of chip size, even though the theory is that smaller is better, there appears to be a limit as to how small a processor can go in relation to benefit.  How efficiently the chip interacts with other components can matter more, and this is what makes Snapdragon so powerful.

The above re-enforces the trade thesis with QCOM, and would expect it to trade toward its highs, if a multiple of 19-20 is applied to the stock.  I would expect to see this considering the fourth quarter is usually a strong quarter for mobile devices.

Posted by echotoall at 1:53 PM