The quarter was good. Even better are the realistic prospects. (I say realistic because analysts and tech writers have a way of running wild with "could be" expectations that hold zero merit.) The two drivers

1. expansion of the current mobile strategy to the rest of world

2. Gifts morphing into a commerce experience 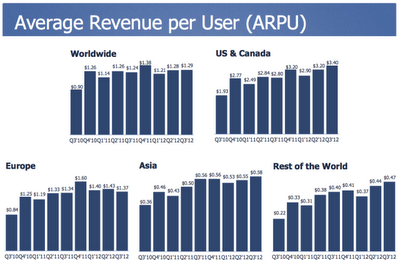 As Facebook's current mobile strategy expands globally, these rates will rise. Especially as the ROW's main connection to Facebook is mobile. (This means Facebook will be gaining a macro wind, and benefiting from global smartphone adoption.)

If after hours action holds up (and with the strengthening of action as the night progressed, the action should hold up) the stock's trading dynamic will shift to a bullish one.

FB will most likely open near 22, which will be a clear breach in SMA consolidation. The technical set up, along with the fundamentals at Facebook's back, 24 looks to be easy.  As the sentiment shifts from negative to positive, and 24 begins to break, 27 will be achieved sooner rather than later.

A stock move to 27 would give FB a market capitalization of about $58B.  Considering the bulk of the 14% of ad revenue is due to mobile within one quarter, the valuation does not seem like a stretch.

A note on the wall-of-'lock-up-expiration'-worry, Zuckerberg controls the majority of the stock to be unlocked.  He has already publicly stated he will not sell for one year. Those words were about a month ago.