AAPL. all about the multiple

The quarter was alright. I'm sure the guidance of 11.75 caught a lot of people by surprise. Its probably the first comparable eps decline in some time. Given Apple's low-ball guidance, I am sure they will produce an eps near or slightly above the eps of last year's 1st quarter. Last year's 1st and 2nd quarter had higher margins. With the multiple tablet push from all competitors, and lower price points of the iPad, margins will simply not be as good.

Regardless, the margin scenario is not stopping top line growth. In relation to any other company AAPL is still cheap, and has been for years.  So they will not see +50% eps growth, they will see 20-30%, and earnings are very stable. Does this merit the stock to collapse?

With lower margins, and a flat eps growth for the quarter, the question becomes 'what is the multiple the street will give AAPL'?

Will the street punish the stock? Allowing it to trade at a trailing multiple near its low of 12.5 because of the flat eps? The street certainly did not reward the stock when it was seeing a +50% eps rate last year with 50 trailing multiple. In fact, when AAPL was growing at a +85% clip the street rewarded the stock with the greatest multiple contraction I have ever witnessed.

Apple now has a cash level of $127-128-per-share. Which means the stock, as of after-hours action (609) has a business value of $481 per-share. This means the street values Apple's businesses with a trailing multiple of 10.89.  For a set of businesses that will see a top-line growth of 13% (2011 1st quarter had an 46B revenue, and 1st quarter 2012 is projected to be 52B), an obscene free cash-flow and product being adopted at a very very fast clip, the street is basically valuing the business as they are Intel's business. (I don't need to explain why this is stupid.)

Excluding the "minus cash" or "valuation-per-cash-growth" (assuming the stock value should trend the cash growth) argument, at 609, Apple has a trailing multiple of 13.8. This is already near its low end.  The contraction is consistent with the current market environment.  If the market holds up, this valuation is too low. AAPL should trend more toward a 14.5 multiple.

From a technical perspective, AAPL's daily chart is very oversold. 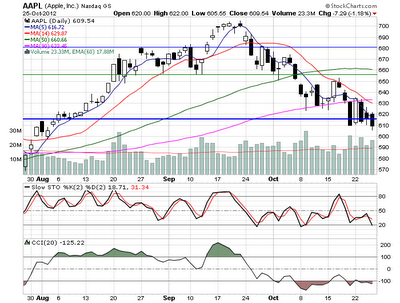 From a weekly perspective, an interesting support is very near. The 28SMA typically acts as an area for a bounce.

If that level breaks, the 50 SMA on the weekly is next. (That would mean the stock drops to the 560 area, giving the stock a trailing multiple of 12.6. Near historically low multiples for AAPL.  That would suck, but given the growth of cash, I do not expect it to happen.)