Due to the 'summer of discontent' post, I am expecting the SP500 to ultimately push to the 1250 level. In the mean time, here is where I think it can go short-term.

Late day weakness settled the closing price on short-term SMA resistance.  The market is still pretty oversold, and with some 'not-so-exciting' data tomorrow, it may see some follow-through on this oversold bounce (maybe to the 1305 level).  If no follow-through is seen, it only re-enforces the thesis that it will test 1250 sooner-rather-than-later. (I took on some protection with today's advance, and if the 1305 level is seen, I will add to the protection.)

Also, some thoughts on copper and BGCP:

1. China's housing market is officially in negative territory. China has a ton of money to absorb this issue, however I do think it only re-enforces the negative thesis toward copper.  With FCX advancing toward its 50SMA resistance, I added to the short. 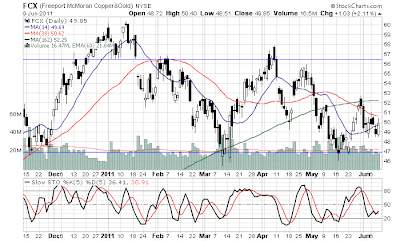 2. BGCP saw a nice move today, and a lot had to do with one of my favorite CEOs coming out defending the business.  Howard Lutnick is such a shoot-from-the-hip, and honest CEO. (Although I do disagree with the fact that QE3 is needed.)

Posted by echotoall at 6:39 PM