AAPL - It is sitting on its 10SMA, and the decline is causing an ease from its overbought condition. In the 350s it is not as inexpensive, but by no means over extended on a valuation basis. (I was selling as AAPL was approaching 365, but today I was buying.) I will buy again if it goes below 355, and an aggressive buyer if it sees the 340s.

If the 10 SMA is broken, a lot of momentum whore traders may sell and cause a drop below 355. But technicals be damned when I think they will be trading at 370-390 toward March/April. (see forward PE link)

(P.S. anti-trust action on Apple due to the subscription model is complete and utter bullshit. Apple is not preventing any company from pursuing subscription services out of the app, and using an iPhone App to take advantage of the subscription. None of these companies even need to have an App for fuck sake. Nor do they even need to use the App Store. They can use Google's Subscription service. Although, the concept is far too new and unproven to even be considered seriously by law makers. I am annoyed my tax dollars are being wasted for a market that has not developed yet, and very big competition already exists.)

IBM - It is consolidated, holding SMA support and just proved to the world it made one of the most significant advances in computer science. (IBM should of made Watson's voice Sean Connery, and added a 'mother' joke at least once in the three days :) We are witnessing the market begin to respect IBM more, giving it a higher multiple. With continued innovation, strong/growing cash-flow and growing revenue we are seeing the "U" shape multiple expansion. The last 10 years IBM has seen a trailing PE contraction, flatten out through the credit crisis and is now fundamentally positioned to see the upswing. I just think a trailing PE of 16 is very reasonable for a company with a fortress balance sheet, awesome cash-flow, very shareholder friendly cash allocation and making monstrous innovative advances in technology. 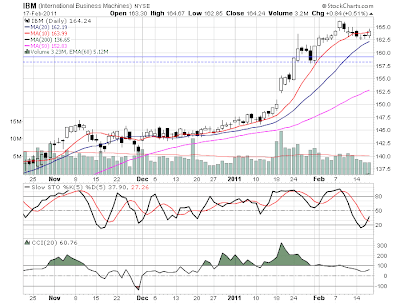 Posted by echotoall at 9:14 PM