While I believe a new trading dynamic is coming, the SP500 is now around the 15 multiple. (Assuming the 2010 combined SP500 earnings are 88.) This is also seen within the trailing PEs of a broad range of individual stocks.

I do not want to mince words. I am bullish, just not as giddy right now because of my trailing PE assessments. (Can't be with the market rising near 4% in less than two weeks.)

Basically I am pretty touch-and-go right now. I sold a bunch of positions to lock in nice gains, but am still exposed. For example, I repositioned some of IBM calls to 160 april calls freeing up cash, and sold some AAPL as it approached the 355 level. (I am still exposed to AAPL calls for the Verizon debut and new iPad hype. Probably unload this position around the high 360s.)

Although I am not as giddy, I am not going to hesitate to purchase positions. I added to PBR due to its consolidation, along with oil's decline. 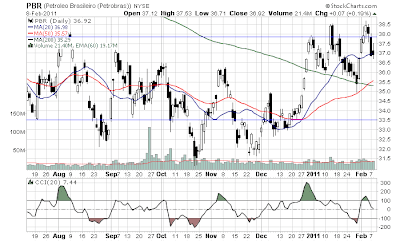