Market Thought... what will Germany do?

I do not care. Seriously.

The more I hear and read about the 'contagion', the more I do not believe it. There really is only one pig in the PIGS, and that is Greece. They have serious structural flaws in their social-economic fabric, which will take years to fix. The fix will be slow, but it will happen. Who helps them get there? I do not care. If the Germans do not do it, the IMF will. Quite frankly the social-economic fabric of Greece is and has been that of a 3rd world country, so the IMF should help them. (That comment comes directly from experience.) The IMF has had success. Despite some controversy, particularly in Latin America, decades ago being viewed as economic terrorists, their record through out the 90s to present day has been fairly good.

I would not blame Germany for not saving Greece. The IMF is more suited for the role, and I believe they will step in and force change.

All other chatter today, to me, was just noise. A market secret regarding the 'noise': if everyone is expecting something to happen, that 'thing' will not happen.

(Sharp catastrophic events are not always the answer. If fact these type of events are very rare. There will be spending cuts made at the Gov levels, globally. But cuts will be gradual, and funnel through the system. If you live in The States, it is hard not to witness these cuts in real-time at the municipal level.)

To put my opinion bluntly, ignore the noise as this correction was suggested way before today. #2 is obviously playing out.

The daily and weekly suggest 1150 level will be the low point for this correction. 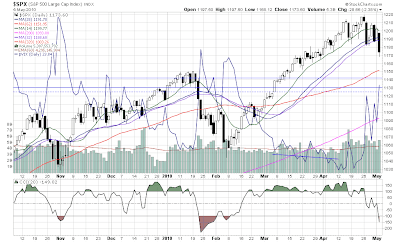 Admittedly, I already covered my protection and started adding. I even added more IBM just before lunch, and AAPL before the close.

Also, INTC looks very good here, so if you are in Cramer's camp about INTC doubling, get off your ass and add some shares. There are countless other names that I like here too.

I have free cash to put to work, and plan on using it if the markets go lower.

Posted by echotoall at 9:23 PM