I want to take on the following trade... its tricky, so don't do it if you don't know anything about options.

GS is so freaking attractive here it hurts. It is over sold, and nicely positioned. But the financials are consolidating here, and after their move I understand why. I like GS for the long-term as well, so I want to commit to buying the stock, and selling calls around the position.

I will buy 100 shares of GS tomorrow, pending on the morning's action the purchase will be before or after 10am. (I would preferably like to see GS break the 170 support, despite having Calls on GS, so I can make the purchase at mid/high 160.)

There is fairly solid support at 170, and I do not anticipate it breaking. 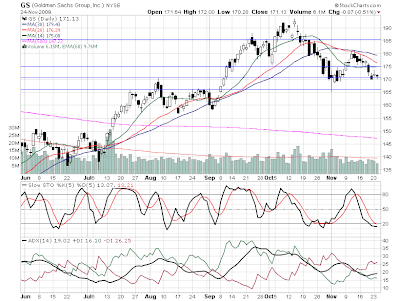 The chart in general looks fairly weak for GS. The weakness is obvious. It broke its SMA support weeks ago, and the SMAs are now acting as resistance. Despite this, I do not think it is the start of a downtrend. (There is just too much earnings power in this company.)

The Slow Stoch indicates it is oversold, and the DMI reveals the weakness is not that strong. Or at least not from blind selling (like PWR or CHK are experiencing). Basically the negativity is very controlled.


I already own Calls betting on a push upward from here, but I want to try a new income strategy from selling calls, and hopefully benefiting from a potential dividend increase.

Then let the stock and sold call run their course.

If the stock does not hold 180 by Jan 15 2010, the sold call premium is mine, and I do the same execution for the following month.

(This isn't the typical strategy employed by option traders. Typically, with option strategies you would buy a long position, and hedge w/another at the same time. For instance, buy the 100 shares and sell a 175 Jan call right away. This protects against down side, but also limits your potential. I take a great deal of effort to minimize the probability of loss when entering a position, via the technicals, and would rather utilize the 'timing' aspect of the trade more efficiently. As described above.)
Posted by echotoall at 7:56 PM