In a continuation to my "be cautious with Google series"...

Google has a yearly revenue of about $8 billion for "other" and "Motorola".  Thats a lot. The effect:

The multi-billion dollar question is whether Google can convert Moto and "Other" revenue into quality earnings.

As of September 2012, earnings have not been quality, hence the decline in margins. (2013 earnings beats were far from quality.)  In fact one can argue, the increase revenue initiative is merely a mechanism to maintain advertising share. In other words, TAC has spiked. (Although Google is not officially labeling it as such. Only within informal interviews where they clearly state the purpose of Android in relation to their Ad business.)

The relevancy to the question is whether or not the market will care.  With the market allowing for an 85% increase in trailing PE since Sep 2012, the market is discounting earnings growth to follow revenue. 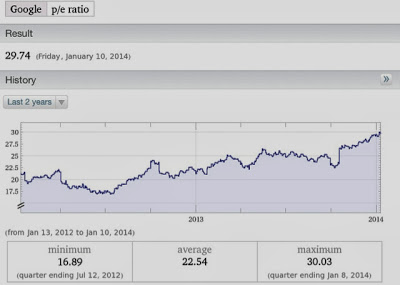