$goog - the black box and weakness

Despite the lack of clarity, revenues keeps rising. The below chart include Q4 2013 and Q1 2014 consensus estimates.

For the pervious two known quarters, below are the breakdown in revenue: 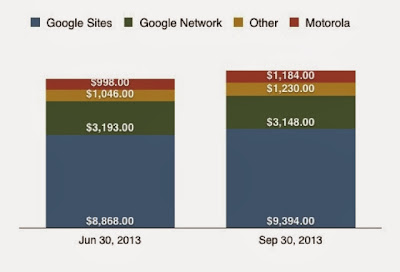 The only segments that are remotely clear are Motorola, and Google Network (ad sense). The other two are more involved.

The shift from desktop to mobile is already in play. 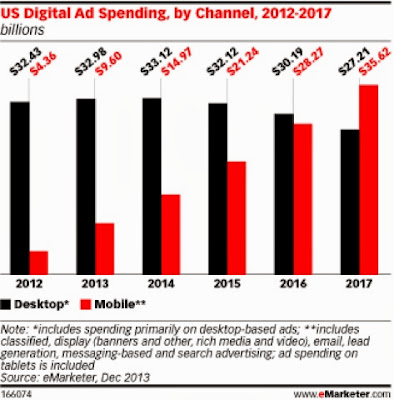 These numbers are obviously a moving target, but they give a good baseline of analysis. Since Google controls about 40% of digital ads, they certainly will benefit.  (Although I question whether desktop can mitigate the decline, as eMarketer suggests given tablet usage data.)

Assuming market share remains, Google should do around $47 Billion in digital ad revenue.  (Not sure if PLAs are covered in 'search'.)

Paid search (PLA) doing well, and can be used as leveraged this quarter.

Although, there are short coming too. Google Maps on iOS got hit once Apple maps came up to snuff.

Observed trends: More and more sites are closing their doors. Sites are charging for content. There have been declines in Ad Sense growth and revenue. Some attribute it to algorithm change, but there has been a definite shift in how content is being distributed on the web and mobile: pay-wall and in app-purchases. (The trend relies less on advertising.) 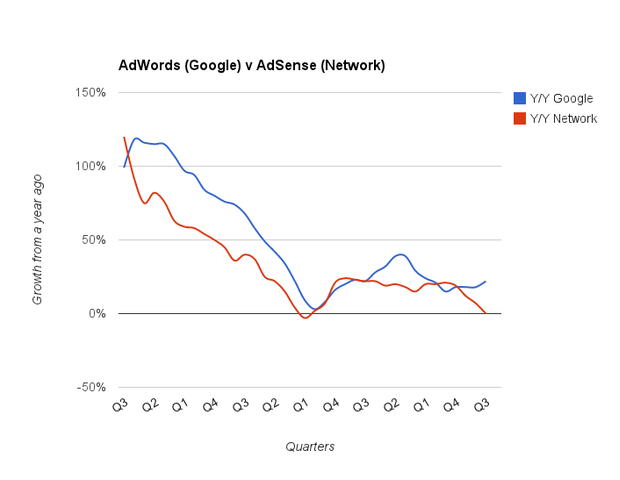 (Other is before Motorola because its more important.)

Other seems to include a bunch of smaller initiatives:

-Google Fiber
-Nexus devices
-Google Play (maybe parts of it, but this is included in "mobile")
-ChromeBooks
-Chromecast
-Google Apps
-Google Cloud services
-any other initiative they choose to compete with the ENTIRE world

This segment is growing pretty fast, but coming from a very low base, and margins are tight on all services listed above. (Except for the cloud and paid apps.)

Motorola phones have not been selling as anticipated. Price drops quickly followed. Although the media had played the price drop via Google's narrative of "high quality affordable". Instead of "phones not selling so price drop to move units".

Motorola's CEO claims the best sales days were in December via a CNBC interview.  To which is a "no shit". They offered the phone, contract free, for a low price. (The Palm Touchpad sold really well when HP collapsed its price to move inventory.) Basically, the media allowed Google to put lipstick on a pig.

1. Google has gotten arrogant. Very arrogant.  They are refusing to comply with rules because "they" find them to be antiquated.  Their opinion of a rule is one thing, but to blatantly not comply because they know the fine is lower then their revenue potential or convenience is simply arrogance. If management keeps this line of thinking they will leave themselves open for a world of regulatory hurt.

Another instance of arrogance was 23 and Me.  A Google sponsored company, who's founder was married to a Google founder. 23 and Me arrogantly ignored the FDA request for years until the agency simply had enough. (No device maker would have been given such leeway as 23 and Me received. Yet the company was so arrogant they disrespected the leeway.)

2.  Mobile Monopoly. While android is horribly fragmented with respect to its developer community, Google's services are not. Google can push their updates to all Android devices via Google Play Services.  A back door Google built into android.

3. A user revolt against unintended consequences.  Google+ is the center piece to Google's version of the future web. (Or rather a means to know your behavior better and provide it with an interest graph to better target you with ads.) The involvement of Google+ has caused privacy issues, "outing" an individual.  Google+ auto notifications may have also put a man in jail. Or the Youtube comment fiasco. (I am sure we will hear how thriving the community is doing during the current CC.)

Oh, and I can not forget that if you actually +1 something on the web, Google can use your profile and profile pic in an advertisement. (You do not get a royalty. That is your cost of using Google.)

4. Earnings quality. Very few big media or analysts are calling this out, but I highlighted it here.

Google has morphed into a semi-closed ambiguous black-box that is now blatantly using its users to sell and target ads. Those ads are growing, and Google should grow with it. But is there enough growth to justify an exponential stock break out?

The street is pricing the stock for a lot of growth.  Google is certainly trying its hardest to expand and justify it. History is still glaring me in the face. Mega Caps DO NOT maintain a trailing PE of +30.
Posted by echotoall at 11:54 PM