Earlier in the month I highlighted that the market would start to trade with a multiple between 15-17 going forward. (A multiple normally seen before the credit crisis.) The market maybe on the verge of this trading dynamic.

The market is having a nice rally, generally supported by most stocks.

What has had me concerned the past couple of days, was the Vix level via the SP500-VIX overlay. Generally, caution was merited when, during this overlay, the VIX approached the lowest red horizontal dotted line.

The past couple of days were interesting because the VIX started to cleanly trade below the 'cautious' level.  This maybe a extension of positive sentiment, allowing for a retest of a long-term monthly resistance near 1500.

Or the current market action could be an indication of the new market trading dynamic that will give the SP500 a new trading range.

The history of the VIX does suggest it can bottom out near 10.

The Jobless Claims this past week set a new low, and in a few short weeks overcoming the spike from Sandy. 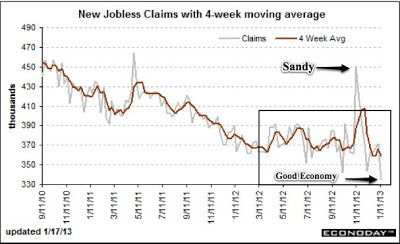 There is also the more real-time indication of Jobless Claims from Google Trends, which clearly reveal a shift.

The recent trend is the lowest since 2009, and if the trend continues, it would suggest a lower real-unemployment number.

Central banks have made their commitments clear all throughout 2012. So the only uncertainty is the employment number. For now, things look good
Posted by echotoall at 1:36 AM