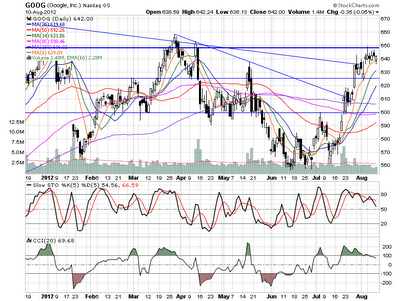 GS - It is seeing some resistance at the 98SMA. I would like to add around 100-101. With US jobs improving (along with US housing in a firm recovery and EU crisis relatively off the table), financials should not be trading this much below book. (GS' book value is near 120-130.) Pending on the severity of a market pull-back, GS can see around 97.

IBM - I like it right now for a push to 202, but I think the SP500 is due for a consolidation/pull-back. So I do not know how that will effect IBM.

JPM - With a similar investment thesis to GS, I would like to add near mid 35.

QCOM - The stock is pretty overbought, but QCOM has a history of rallying with extreme overbought conditions. It is also still trading below the low-end of its trailing PE range, while the world is in one of the greatest computing transitions (mobile) in history.  The resistance levels I currently have on the below chart are weak. The real resistance should be near 68.

FIO - Their latest quarter suggested their software strategy is working, and it is able to distinguish them from the competition and provide some level of pricing power (which is lost via their partner-distribution).  I am not going to actively trade them yet, but I will keep a close eye of FIO again.

An interesting observation, before FIO reported, was that a previous post of mine specific to FIO, saw a  sizable increase in page views prior to the report.  The activity made me look into FIO again, and the quarter report got me really interested.

SP500 - The VIX is at the bottom of the range of the Vix/SP500 overlay chart. In the past it signaled to protect, and so I protected. Hopefully, the scenario will facilitate moderate level of declines to allow for the entries above. (Not expecting a large decline. I would be surprised it the decline is greater than 3%.)

Posted by echotoall at 1:53 PM