Anyone following the EU PMI data knows Europe is already in a recession. The EU composite PMI follows the GDP very closely. 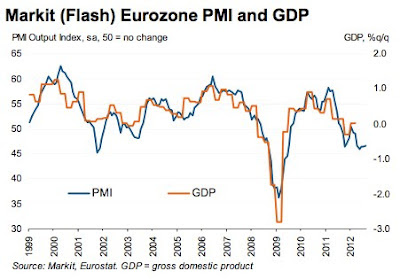 The EU recession is no revelation, by any stretch of the imagination. What is more surprising is how long Europe has been able to squeeze out a positive GPD for so many months.  The manufacturing PMI has been in the shitter (below 50) for months.  And the recent Flash numbers has been awful. 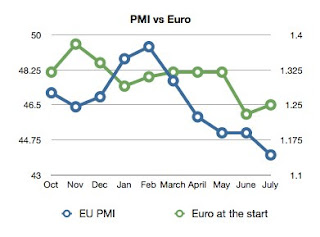 Despite the crappy data, the Euro remains fairly resilient. IMO, this is an inefficiency.

Europe is China's largest trading partner, so the slow down in China does Europe no good.  But as China rolls out subtle stimulus, along with chatter of a $1.2 Trillion stimulus drive through multiple provinces,  China should be okay for the time being.  Which should help Europe too. ($1.2 Trillion is about 16% of GDP! But I do not see specific details on the stimulus yet.)

Posted by echotoall at 8:51 PM