Every now and again, I do a complete re-evaluation of my market thesis. Even though, I consistently monitor and change the thesis as new data develops. Since the SP500 is at a support level I did not think we will see this cycle, I wanted to re-review the macro economic picture.

The markets have told investors US growth will move toward the direction of job growth. The disappointing jobs data two months ago started the collapse in the 10yr, which triggered unease with the big boys. (The 10yr is used to measure US GDP growth. A low 10yr yield means a lower assumed US GDP.)

Since the crappy Jobs number, the jobs data got a bit better. Jobless Claims continue to point to a left-to-right trend, which is good news for the US economy. 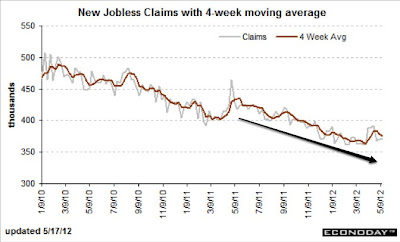 Obviously claims need to continue to trend lower.  Then the Employment Situation needs to confirm the jobless claims' trend.

The situation in Europe seems just as fucked up today as it was at any point over the last 3 years.  However, the situation is fairly different. I have highlighted this before:

2. An ECB proven to facilitate, now that cost controls are in place.

3. A mechanism to cutoff a troubled country. (Cut the leg off to save the life.)


4. Banks in troubled countries can be re-capitalized, and supported for far less than the 1T available


5. Spending reforms have already been implemented

This link redirects to a previous post with a good video highlighting the EU situation.

The above alone should mitigate fallout from Europe, but there is also the current willingness from global Central Banks to ensure contagion does not spread.

Since the beginning of May, China has been in a straight line down.

Everyone knows China's GDP is going to decline as they transition to a more consumer based economy.  Right now, the negative chatter will continue as the negativity is corroborated with declines in Chinese share prices and the commodity complex.

Investors are looking for data points that show an increase in Chinese consumer demand or stimulus that will facilitate the transition.

But there should be no over-stating the obvious. Chinese middle class is growing, their savings rate is large and their buying power is sizable. Companies selling into the Chinese middle, upper-middle and upper class in China will see no impact on their earnings.


I don't know how else to describe the course of events over the past couple of days that had a definite impact on market performance.

a. JPM's stupid trades. Any positive sentiment on the banks, due to improvements in housing, was thrown out because of JPM. Regardless of the bank's balance sheet and actions, the bank-bear's negativity became re-enforced, and contributed to the overall negative market sentiment.

b. Facebook's IPO. Talk about a fuck up. Nasdaq fucked it up. What ever the reason, around 12:30pm every stock basically declined on Friday, imo, due to the botched execution of the IPO.


The fear of Europe, along with global economic slowdown fears caused the markets to decline, to levels I generally was expecting, near 1340. But the "Fucked-up coincidences" gave us enough negativity for the market to touch its longer-term support, the 360 SMA.

I was not expecting the market sentiment to be so negative to allow for a retest of the 360SMA, especially after consolidating at the SMA for 5 months prior to the market's leg-up.

The markets are very oversold, and are now sitting on an important support level. From a technical stand point, now is a really good time to start 'loving' (not liking) the market.

But a dilemma persists: Are equity shares cheap enough in relation to the above concerns?

Regardless of what anyone says, a stock, the piece of virtual paper, has value. To ignore this is to ignore the truth.  Despite the axiom "cheap can get cheaper". Barring a systemic event, "cheaper" has to be justified.

Value is always a relative term. But if anyone had the ability to buy into a company that has an earnings yield far higher than the vast majority of other investments, that is involved in a secular growth curve, would anyone say no? (That is what is currently being said with respect to GOOG, AAPL, QCOM and many others.)

Historically, a trailing multiple around or below 12 is really really low, if not rare. Real fear surrounding EU wide bank runs, not just Greek or Spanish banks, but all of Europe's banks. The mechanisms mentioned above, while financially unhealthy if sustained for a long period of time, prevent systemic bank runs. If a systemic event is prevented, then a trailing multiple of 13.3 is far too low!!

This does not mean countries can not default. They can, and maybe will (and in Greece's case, default again). But for those who think government can not maneuver out very difficult situations, should familiarize themselves with the history of NYC.  For a city's who's GDP was larger than many other countries in the world and expected decline declared irreversible, NYC never defaulted, and still thrives.


The situation can look shitty, if you want it to look shitty, but Apple stores are still packed. Chip demand for mobile is so high manufacturers can not keep up with demand. Google is still growing Revenue by 20-25%. SP500 earnings grew by 5-6% when they were projected to be flat to down. Global GDP is still humming along.

IMO, the biggest (most realistic) risk to multi-national earnings is if they are not properly hedged against the coming Euro decline. But these guys actively hedge, and the currency risk should be minimal.
Posted by echotoall at 9:19 PM