Google is ready for MMI

If there was ever a 'tell' that Google is ready to merge their awesome software capabilities with hardware its their Google Glasses.  And quite frankly, the industry needs Google to step it up. Apple is far-and-way the leader in the post PC transition. Every leader needs a true competitor, if not for the sake of constant improvement.

In late January I highlighted the combined company desperately needed to improve their margins.  Since then, Google has seen a systematic increase in overall margins. 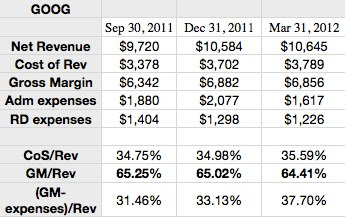 This positions the combined company pretty well, especially considering the low-hanging cost-cutting-fruit via MMI. (The most obvious being the elimination of at least 20 of their 27 product offerings.) The combined company is approaching overall margins similar to what Google did in Sept of 2011. 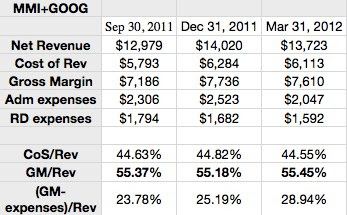 If Google acts on the low hanging fruit by focusing their products on smart-phones and tablet, and removing excess manufacturing capacity from the lower product offerings, the combined company can approach margins toward the mid 30s.

The above became evident after Google reported, and the benefit will become more obvious as the merger develops.
Posted by echotoall at 10:32 PM