I am tired of the played out 'American-economy-is-slowing-down' argument. Everyone and their money-making-pessimistic preaching mothers can see this.

The markets are very inexpensive here. Extremely inexpensive. The most prime example being AAPL. With a trailing PE of 18.75, and a forward PE of 14ish, while having in excess of +18% total organic eps growth. (That is cheaper than GOOG, and not even taking into account the $50 per share of cash AAPL has on hand.)

Then there is IBM. A company that hits its marks consistently, utilizes its cash very well, projecting 15% eps growth to 2015, yet is trading with a trailing PE of 12.08 and a forward PE of 10ish.

I can go on-and-on, using company after company, but people far smarter then me have extensively studied this, and they have come up with the same conclusion. (I've posted the link before.)

The market is CHEAP!

I know the counter argument, 'If America slows down, the world economy will crumble with it. So earnings in companies will decline. So the market will go down with earnings.'

That was the argument for the second quarter, and since this argument was completely disproved, I guess it is now being pushed to the 2nd half of the year? (Despite the fact that the only major company telling us anything of this nature was Cisco. But even Chambers stated that they will still meet there earnings projections regardless of the bumpiness.)

Here is where I lose sight of the 'counter argument': Calculating the BRIC countries GDP (figures are 2009 est via World Factbook), I arrive at a total GDP of $16.49T. This $16.49T is growing thanks to the early innings of consumerism taking hold in all the countries. Its also larger then the USA and EU GDP. (USA being at $14.26T and EU being at apprx. 16.4T)

So, if the USA and EU economies are simply sluggish and grow at 1%, and if the BRIC countries are still growing, the accumulating effect is a growing global economy. Since AAPL, IBM, GS, INTC, GOOG, or any other company with large international exposure, are all exposed to that growth, their EPS will grow. (As they all keep proving, with McDonalds being the prime example.)

This concept is so completely lost by many of the big boys, it truly boggles my mind. The big boys have 'de-risked' so much, that they are barely in the game, hence we have these price-to-earnings ratios that are awesomely mouth watering.

Okay, so that is my 'think a little' rant :), here is a look at the potential short-term market action. A few scenarios I see potentially playing out:

The SP 500 re-tests the 320SMA. Considering the negativity, this is reasonable.

I do not think we re-test the low 1000s because there is no threat of country default right now.

The other scenario is that we bounce from here. The weekly indicates support, while the 10yr treasury is very overbought (yield being oversold).

I have made no secret that I have accumulated more AAPL and IBM, in case we bounce from here. But I will load up if the SP500 retest the 320SMA. 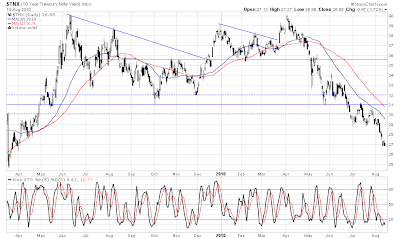 Posted by echotoall at 8:14 PM