The market dynamic has NOT changed. IMO, this is a correction with the current dynamic. Since July (when the dollar collapsed from its support), imo, the market rally was a liquidity lead rally. This plays a major role in my current market view, and why I am playing the UUP and TBT. As such, the only thing that can de-rail this dynamic is a fundamental shift that will take dollars out of the system. We may get that, or a real threat of that, on Nov 4th via the Fed Meeting, but right now the market is not indicating that.

Regardless of my thesis, however, very real economic progress has taken place. This is why I am ultimately a bull, and certain stocks my seem like a good play at these levels. For instance GS, AAPL, BKE, PWR, NLC and F to name a few. (All oversold, and itching to be bought.)

Looking at the SP500, it is oversold and sitting on a support level. 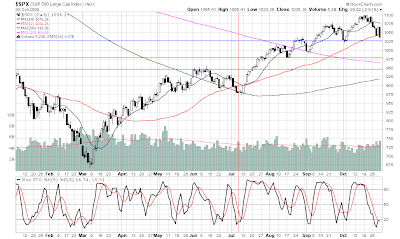 Within this market decline, the 10yr yield went down, so this tells me the decline was not due to the anticipation of rising rates. Indicating the current dynamic is in play.

Now, combine that with the VIX. A huge spike is usually a buy signal to the market. (Keeping in mind, the VIX is not an investment, at best its a day trader tool to hedge the market, but its an indicator.) In a stable market, a VIX of low 30s is high.

So, the SP500 is at a support level, with a spike in market fear, and the liquidity in the market indicating it will remain (via the yield). I conclude this as being the 'same old', and merits stock purchases. Especially for large cash flow, lean, high growers like the names I indicated above.

Remember, the Fed Meeting is the wild card, but any liquidity to be removed from the market, IMO, is what can safely be removed not to hurt the economy.

Over the next few month, depending on what the Fed indicates, we maybe in a 'economic equation' shift where the dollar will stop declining in relation to an upward moving market, due to real economic growth and higher rates.
Posted by echotoall at 12:58 PM