$aapl analysis (not that it matters)

Any kind of disappointment, frustration and annoyance I try to express is an understatement. 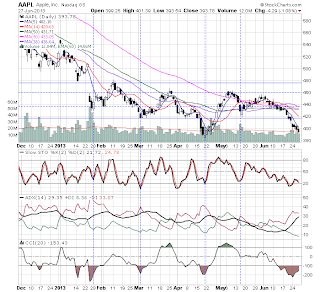 Before its buy back, there was a cycle of negativity, hence no demand for the stock. No demand, stock falls, valuation gets compressed. The multiple is now compressed to the level of the great-recession.

After the $60Billion "demand" was announced, like magic structure started to develop within the chart. A nice jump off the low, and negative trend lines were broken and being tested.  The 10sma, on the weekly chart, the resistance line that saw AAPL go from 700 to 376 was breached. Awesome, structure was developing. 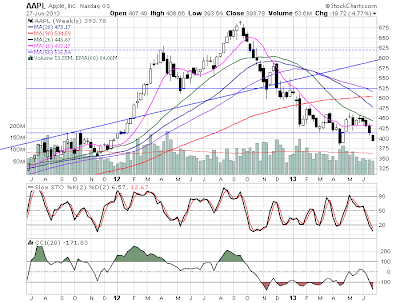 The daily action was consolidating the move off the low, hovering near the SMAs and horizontal base. (Healthy set up for a continued move up.) All seemed well.  The buy back provided a new trading dynamic. Structure was being confirmed. The buy back seems to appear near 420, around May 15th, allowing AAPL to maintain the support of the many SMAs. (It maintained structure.)

Then on June 1st demand simply walked away. A liquidation began, and the liquidation was met with zero demand. Where the fuck is the buy back? The buy back is suppose to mitigate this type of crap. (Especially in an up market.)

Assuming an even distribution to the buy back ($20B per year), there is about $54million worth of demand every single day.  But the $60 billion was not specific as to when those purchases were going to be made. Theoretically, the purchases can be very lob-sided, and $30 billion take place over the next 6 month, while the rest takes place over the next two years. But there was nothing. (Or, at the very least, the DM oscillator w/in the daily chart suggest the liquidation value was far far more then the $54M.)

Now, everyone that believes in the fundamental story, and ignores the bullshit chatter from a hypocritical Google to Samsung (with known fucked-up shady marketing practices), is again left frustrated.

Despite my frustration, I completely understand a degree of weakness within the shares. Stocks are merely a function of perception.  The better the perception, the better the multiple. (Hence my rant about managing the stock.)  Apple started fucking up the perception during the Q4 2012 quarter. While beating their own estimates, they did not beat the street. Since then, Cook did a cut-throat job at slashing the street's expectations. And their forecast for Q3 re-enforced the destroyed expectations of the street.

Also, the recent earnings slump has a lot to do with margins.  The year-over-year comparison is very tough when outsized (44-47%) margins are seen. Margins have simply normalized, and that is reflected in the EPS.

Apple has effectively reset wall street expectations. They now have to beat those expectations and prove earnings-per-share have stabilized or can accelerate (to some degree) again.

Frankly, I do not care what analysts have to say about Apple.  With a buy back (they actually execute) and stabilized earnings, their trailing multiple will approach other large tech stocks that do the same. (MSFT is at 17, IBM is at 14, INTC is near 12 and even after ORCL's horrible miss its PE is at mid 13.)  A multiple of 12-13 is not unreasonable.

In the mean time, the charts are just crap.  If AAPL can reverse from here, it will see a higher-low, which is good. But it will still need to break through the SMAs it melted through.  Even if that happens, it looks like it will channel trade until earnings growth accelerate again.  (If eps stabilizes at 40, and Apple beats the street's expectations, with a multiple of 12, the stock will be at 480. Top-end of the channel.)
Posted by echotoall at 12:30 AM