(Curious as to when Mark Zuckerberg will let go of the hoody?)

What I found to be the most interesting part of the Home demo today was how fluid the software layer worked. Looked pretty good. But before I go into Home, first some facts on the mobile Ad front.

A taste of US mobile Ad revenues. Nice growth.

Mobile Newsfeed Ads highlighted below suggest a higher conversion, but still a lower cost-per-click compared to the PC.

The CPC should begin to rise (probably more strongly than anticipated) because of the sheer time Facebook users spend on the App, Facebook's ability to target their Ads (with good ROI results) and the continued strong adoption of mobile. 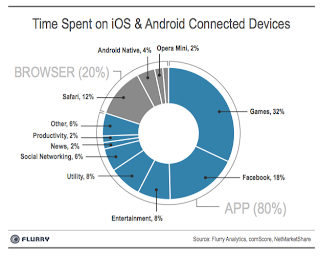 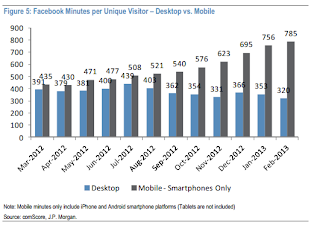 All-in-all, the mobile situation (not including Home) seems on the up and up. Its a situation that does not merit a negative trend.

The introduction of Home, and its potential, is a bonus.  Home looks like a marvel in software capability and UI. Solidifying the thesis that Facebook "gets" mobile. (Any analyst or guru who say otherwise is truly not worthy of their position.)

Home will obviously not be for everyone. (Its not for me. I just don't like all my actions being tracked, whether it be by Google or Facebook. This is why iOS is for me.) But Home will be for a lot of Facebook users.  Facebook has about 600-700 million active mobile users.  Of those users, if only 10% are power users (who really don't care about their privacy), and have Android (version that is capable of Home) thats 60-70 million users of Home.

That's 60-70 million users to extract graph information, and provide Ads. (I suspect ads on Home will be worth a high premium.) With this hijacking on Android, Facebook will be in an awesome position to  push Graph search and truly unleash its potential as a local search engine. (As per comScore, Facebook dominates local search on social. No link to this, just a big infograph that is too cluttered with other info, so I will not include it.)

Good stuff Facebook. Today you deserve a fuck-yeah.
Posted by echotoall at 10:45 PM