$aapl chatter during the quarter

There is the good, the bad and the wtf wild cards.

1. Mac sales improved from the manufacturing-induced hiccup. Apple's fiscal Q1 led a to a sizable decline in Mac sales. Q2 looks to have made up those sales. (31% yr-yr increase; Gartner estimates a +7% growth; (although IDC estimates a decline of 7%)

2. Increased sales w/in emerging markets due to a greater focus. India saw a noticeable rise in sales. Then, after the increased sales, Apple implemented creative financing to facilitate higher sales.

5. Smartphone growth will only continue. (here is another study saying the same in developed and developing countries)

6. The desire for the iPad still dominates.

8. Apple's Google-esque web-services improved.  (Not to mention Apple is tops the charts as a media based cloud provider.)

1-7 should bold well for earnings. 4-8 should imply continued success for the June quarter.

2. Due to new financing (via the emerging markets and some US carriers) iPhone ASP may decline, somewhat. (Over the last 4 years, ASP for iPhone has been very stable near mid 600.) Not sure how this will effect eps.

3. Cirrus Logic announced $20M of their inventory will be a write-off from a "large costumer" as the costumer transitioned to a new product.  Apple is their "large costumer". The below quote is directly from Cirrus' latest 10Q:

Few potential conclusions: 1. the forecast from Apple were overstated; 2. Cirrus over produced to ensure supply would be met (to prevent a 2011 production issue repeat); 3. the contract manufacturers over stated forecast. (Given Apple's ability to quickly adjust the supply chain to demand, along with the items mentioned above, I am leaning toward #2.)

1. China's blatant media blitz against western companies. (The manipulation was known early, and still, Apple officially apologized fairly quickly. Not sure if this hurt sales.)

2. Almost every analyst lowered expectations this quarter. (Literally, there was one or two a day for the last couple of weeks.  Facilitating the current discount and negativity.)

The biggest concern is that Apple will not meet analyst expectations going into the June quarter.  As of today, those expectations are 39.62B for Revenue and 9.28 eps.

The 'wtf' wild cards, and today's Cirrus news, has obviously discounted the stock. The negativity in Apple is so pervasive if Apple can simply meet expectations the market will not need to discount an eps decline of 30-35%.  A re-assurance of EPS stability may lead to a multiple of at least 12. (A reversion to the previous low-end PE.)

Apple is very very oversold. From long-term monthly chart, the last time Apple was this oversold it was during the great recession. 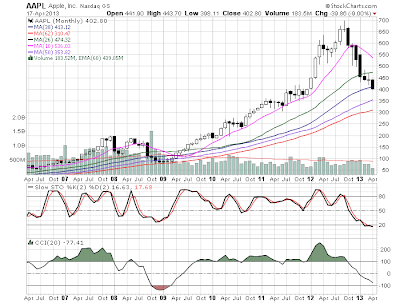 If AAPL can't, at the very least, meet expectations then the negative momentum (along with another cycle of negative analyst commentary) may take it for another 100 points.  Rational valuation of product-lines be damned.

(Times like this I wish I wasn't so rational to the fundamentals.)
Posted by echotoall at 1:02 AM