The voters have spoken, and the chatter from the republican party seems like they understand the need to embark a more moderate tone.  Most shocking, and comforting, was Boehner firmly establishing the House's willingness to work with the president.

IMO, the 'fiscal cliff' uncertainty will end quickly. (If not, the republicans seal their fate in 2016. Hurricanes we can not control, jumping off a fiscal cliff we can certainly prevent.)

Boehner's statement is the strongest and latest confirmation of a new Washington. Frankly, I am surprised the market did not adjust for this chatter.  Instead, the market declined about 4% in two days.

Complimenting the market decline was the weak action in treasuries.  After the election, the 10yr decline below support levels.

What I find particularly inefficient about the current decline in treasuries is that it is contradicting the jobs data.  As indicated in the above chart, the last 5 employment numbers have been better than expected.  On top of this, the jobless claims, while volatile, have been near the low end. 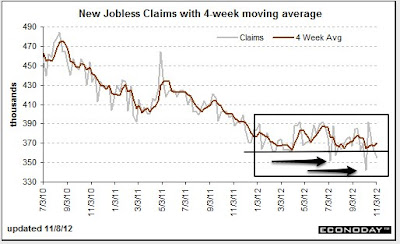 Economically, there seems to be a disconnect with the action in treasuries and job data.  The disconnect is contributing to the market decline because a lot of models use the strength in treasuries as a point of reference.

The market was already reacting to a weaker earnings front, but some of that weakness was already expected. So the move to 1400 on the SP500 was not surprising. Consensus estimates were for the SP500 to see a decline this quarter.  This was factored into my previous Market Thought post.

The timing of the decline does not suggest this is an earnings decline. Also, the market is allowing for some serious multiple compression, especially within the technology names.  This maybe attributed to the weak technicals in the Nasdaq.

Of course a lot of this weakness is probably due to AAPL. Seven straight weeks of decline, seven!

3. The trailing multiple is simply too low. Way too low. From a trading pattern perspective, below 12.5 is a super strong buy for AAPL.

Anyone can whip out superficial negatives for AAPL from manufacturing issues to management shake-up to whatever the talking heads care to pollute the airwaves. The fact is, AAPL will be experiencing lower year-over-year comparisons. Does that mean anything for a company increasing its cash position about $4-10billion a quarter? The awesome, +85% growth, comparison did jack-shit to the stock's multiple from 2010-2011. I pointed this out about a year ago in the "Apple stock seriously discounting" post.

The "Apple stock seriously discounting" post highlights the severe multiple compression experienced since Apple's fiscal 2010-present. Since then, a very strong argument can be made AAPL has been basically trading with its cash position.

(IMO, the cash vs stock price also highlights why AAPL is not your normal parabolic chart. The move is supported by the most important capitalist foundation, cash.)

Needless to say, I think this market decline is ridiculous and way over done. Along with Apple's decline.
Posted by echotoall at 10:34 PM