The week of meetings. The president is meeting with business leaders today, and civic leaders on Friday. How awesome would it be if a deal was announced this weekend!?! (It wouldn't be awesome, it would be Fucken-Awesome :)

Around 10:15-10:20 this morning the market lost its air. The only economic data point around that time was Business Inventory, and the number was better than expected. So that's not the reason for the decline.

It seems as if the bigboys are simply waiting. Momentum boys are using this to drive direction. They chose down. (Ill update this post with some charts later in the day.)

Looks like we are in these mo'mo hands probably until the end of the week. I don't think any short, in their right mind, would want to take a chance going into the weekend over weight short, in case a surprise deal is announced.

Keep in mind, CEOs want a deal. They don't mind some tax increases, and seem to be on the same page with the president. Leaving the House as the road block. (Whose leader is open for increases.)

Update: The market is front-loading the "bitch-slap" to our civic leaders. The weakness throughout the day is putting more pressure on both sides to get the deal done, with the Republicans having more to lose if they fail. (There is no excuse the republicans can run from, fresh off of an election, which chose Obama's message.)

After 10:15ish, the SP500 started to breach its 200sma, so the negative chatter was inevitable.

On a few positive notes, the SP500-VIX overlay, along with the market's very oversold condition, suggests we are near a bottoming (assuming a deal is done).  The treasury yield is also very oversold, and it did not act as safe haven play. 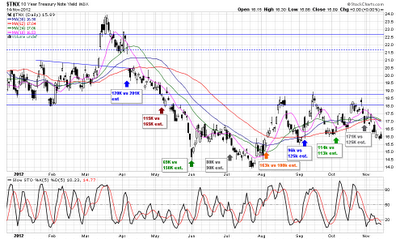