The action of apparent market leaders are giving me the sentiment that the negative end-of-the-world people have won.  (Don't really know what they will win. Their premiss is a lose-lose for everyone.)  Kinda sucks. I hate defeatist negativity. I simply do not know, nor do I care to understand, how to be a defeatist. I hate it with an absolute passion.

I look at QCOM, and I just don't know what to think. The stock is off over 22% from its high because of Snapdragon production issues and a hiccup in US smartphone sales in March and April. (Although May picked up from April.) I understand the need for a level of negativity, and the market to contract the multiple well below 26. From the 1st quarter, QCOM has seen its trailing multiple contract some 38%. A stock who's biggest problem was high demand.  Now the stock continues to trade at historically low trailing multiples. 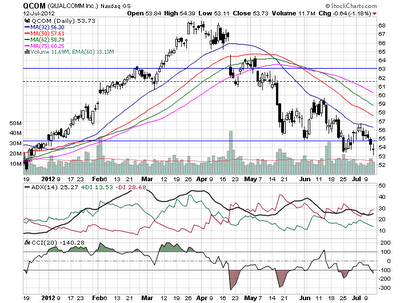 If the market is truly expecting such horrible things coming from mobile, why is Apple holding up relatively well? Based off of AAPL trading history, if the mobile landscape is truly as horrid as the QCOM chart suggests, then why isn't AAPL trading near its low end multiple range of 12.5-13?

Then I look at GOOG, and wonder why this stock is trading at recession level multiples. Has everyone simply forgotten about the Google I/O conference. Anyone who claims Google is the next Microsoft, after the I/O conference, doesn't know what they are fucking talking about or these people are having a momentary lapse of sane judgement. (One company releases a kick-ass tablet that is overwhelmingly viewed as the iPad's nearest competitor. The other company produces a kick ass video of a product that will be ready in a few months, which no one can play with and the device crashes during the demo.)

Android 4.1 truly elevates the OS to compete with iOS.  The fragmentation issue can be viewed as a negative due to the potential to lose developers, but that has not happened. (And consumers do not give a rats ass about fragmentation.) In fact, a very real argument can be made that fragmentation will start to disappear over the next few months. The two year life cycle of Android 2.3 phones is coming to an end over the next few months. These consumers will either go to the iPhone or the newest Androids.  I think the proliferation of the higher quality OS will facilitate higher ad metrics for Android. I am a believer that the ad metrics for Apple is higher because of the facilitation the better OS (iOS) has for mobile browsing. With Android 4.0-4.1, Android users will have the same level of interaction with their devices as iPhone users. CPC will rise, removing the stigma Wall Street has from the lower CPC for mobile.

Recent reports have already suggested CPC rates have flattened. If this is true, or the rate of decline has significantly slowed, I think the street will view Google's report positively. (Barring a Rev/EPS estimate miss.) But the CPC has become a show-me story.

As for the uncertainty of the MMI merger, I have already shown Google has prepared for it.  Over the past few quarters Google has prepared for the hit to margins MMI will cause.  IMO, the merger is no longer a concern. In fact, I view it as a positive as there is a ton of easy cost cutting to expand the combined company margins.

With Google's firm leadership toward innovation, I am puzzled as to why the stock is allowed to trade at recession level multiples.

IBM is the other leader that has me a bit puzzled over the past few days. The current action could be sympathy from INTC (and other big name tech stock) declines. Or maybe sympathy to Infosys.  But you do not need to be a chartist to understand the trend. 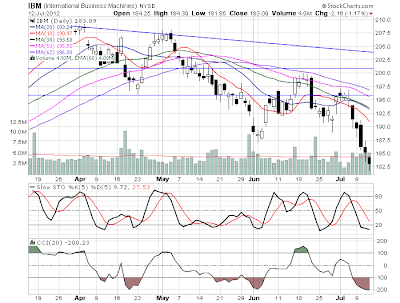 IBM's strategy still seems intact, and they report next tues. Usually it rallies into earnings, and I was hoping to capture a run up into earnings. I expect them to keep performing, but I can see a currency risk. If they are not properly hedged against the Euro, their revenue maybe affected.  I have always held the belief that IBM will start seeing pre-crisis multiples, near 16-17. Negative sentiment took over, but I still think it deserves a multiple near 15.

I keep waiting for the moment the market will start appreciating valuations, instead I feel like Vladimir and Estragon.

Today I was a bit surprised the big boys did not appreciate the Jobless number as much as I did.  The downward trend was re-established. That is a really good thing. 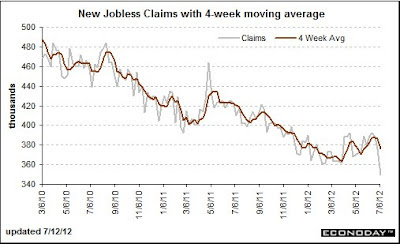 Yet the 10 year treasury could have cared less about the re-established trend. The yield is so low I can understand why market multiples are so low.

Today the markets got a really good sign. The markets chose to ignore it. But the trigger to the current market sentiment was the Monthly Employment Situation. Maybe next month, if we keep getting these type of Jobless Claims, the monthly figure will be enough to drive some money into the equity markets.

Fun Fact: I actively read a very good data intense blog focusing on mobile and PC trends, www.asymco.com. Today at 7:48am, while in a passenger in a car, I check the blog on my iPhone, and see a post titled "Waiting for Godot." I thought it to be fascinating that for two very different subjects the same book was used to set up a blog post theme within hrs of each other.
Posted by echotoall at 1:16 AM