A lot of market internals have improved last week. Draghi's comments were clearly a catalyst. Merkel and Hollande confirmed the Euro conviction. But, imo, the real hero was the Jobless Claim number.  The number was below 360K, which allowed for the falling jobless claims to re-enter the down trend. 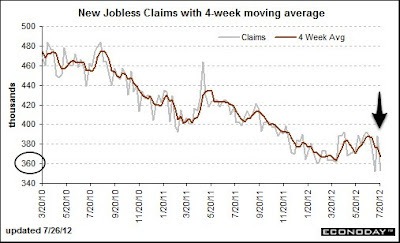 Adding to the goodness was a slightly better than expected GDP. This facilitated in a spike in the 10yr. Since the crappy April jobs report, the months since then have seen number below expectation and the 10yr acted accordingly. However, Friday's spike is indicated its bottoming.

The yield can continue to decline if the Employment Situation continues to preform like shit. The US will find itself in a deflationary situation, and the current negative returns (adjusted for inflation) will be no more.

If we keep getting good Jobless Claim numbers we should start seeing it in the Jobs Report. Over the next two months I am expecting really good reports.  Solid Job numbers will cause the treasury to rise. A rising treasury yield, due to a firming economy, will cause stock market multiples to rise.

Many individual names (GS, IBM, QCOM, GOOG, JPM to name a few) broke their intermediary down trends last week. Hopefully this is a prelude to a bottoming treasury yield.

Now, only our politicians can stop dicking around, and prevent the 'fiscal cliff'.
Posted by echotoall at 6:31 PM