Baring a complete European melt down, which I am not expecting, the below are pretty solid trades.

AAPL is going to 446 by the end of the year. (IMO, that is an easy thing to say because AAPL should be at 446 right now as per my valuation thesis.) But the even easier play is AAPL to 423, the upper trend line resistance. In the very short-term, there appears to be an interesting tug of war within the technicals. I can see AAPL pop from here or see between 385-390. (I am selfishly hoping it does see 390 before 423 because I want to add to the position, but am waiting for clarity via the technicals. At 390ish AAPL will be oversold enough to justify a heavier position.) 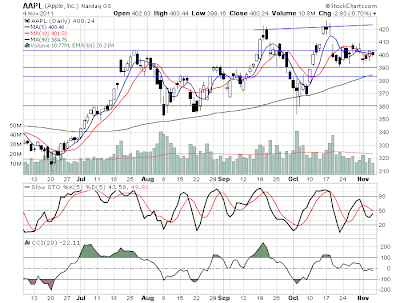 DIS wants to push to 37-38.  DIS reports on Thursday, and I do not know if their report will be a catalyst.  If you can handle the risk, an initial entry prior to earnings, with an expectation to double down after they report, would be the prudent play. (The 38SMA will probably not be breached.)

The market will push to 1330 by the end of the year. If an individual stock doesn't tickle your fancy, use the SPY or Jan 2012 call options with 122 as the strike.