AOL - I have been watching them closely for some time now, ever since Tom Armstrong and his team took over. They are smart and capable, and have made head way. With their purchase of Techcrunch I will not be able to escape them now. (I am an avid reader of Techcrunch.com.) The last few months have been bullishly stable. Its forward PE is 12-13, and if AD dollars are coming back, AOL's new strategy should be well positioned. Its potentially breaking out. I want to wait for a consolidation, then enter the name.

AAPL - Today was the day to take advantage. My trigger to sell, on pure technicals, is the red line of the weekly slow stoch to go over 80. We are not there yet, so I buy on weakness. 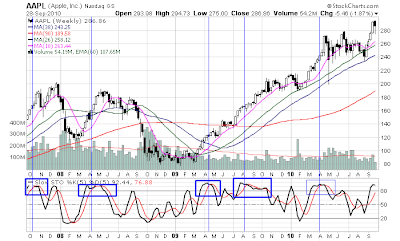 IBM - Talk about a 60deg angle :). Originally I wanted to wait until 137 to unload the remaining of my IBM shares. Why 137? No reason. Its purely arbitrary. But with the craziness this morning, I later unloaded in the strength. The position was too big of a winner to allow to give any of the gains back via a consolidation or pull back. (Similarly to what AAPL did, suddenly.)