In late August I wrote Yahoo was at a turning point.

In that post I highlighted that Yahoo has established value for Yahoo Japan and the remaining shares of Alibaba of about $17 Billion.

This mean the market is currently valuing Yahoo web and mobile properties at $18 Billion (excluding cash and assets). (Since the 'turning point' post, the properties saw an increase value of $7 billion.)

Yahoo consistently ranks among the top web properties and high on the list of mobile properties. As per comScore: 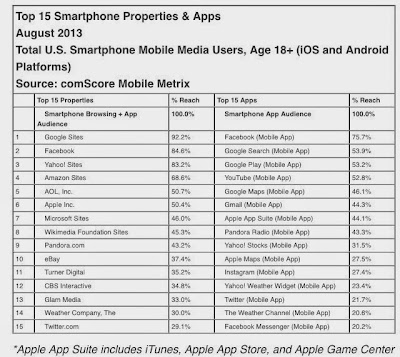 The mobile race for applications is of three horses: Google, Facebook and Yahoo.

For web properties, Yahoo has regained the top spot from Google. 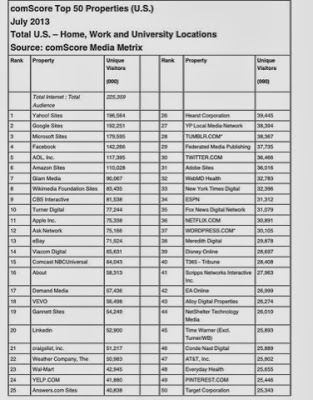 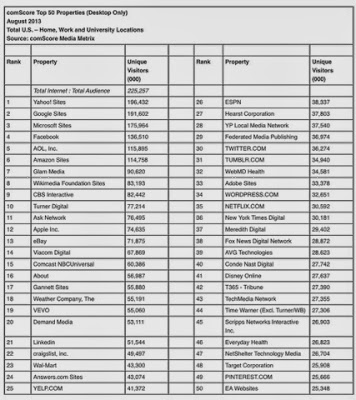 As per comScore, Yahoo is racing against two companies.  Google and Facebook have market capitalizations of $290 Billion and $124 Billion, respectively.

There is a huge Gap in valuation here.

I would argue Yahoo's real valuation to web and mobile properties is only $18B, which brings the gap strikingly wider.

When Yahoo decided to bring Marissa Mayer as CEO, they were making the conscious decision to bridge this gap.  In the most simplest of terms, the great arbitrage had begun.

To ensure the arbitrage continues we need to see Marissa's initiative continue.  IMO, they include:

1. Yahoo needs to maintain a culture of high-pace productivity. Pumping out quality mobile apps and web improvements quickly. (As quickly as Facebook and Google.)  So far Yahoo has shown to sprint pretty well, they simply have to keep it up.

2. Tie in a social element to all their properties.  Leverage the data from web, mobile and social sharing (via tumblr and Facebook logins) to produce better ad targets. Thereby increasing its value proposition.

If Marissa can keep these initiatives going, the valuation gap between their online ad competitor will shrink. (Albeit, Google's valuation does not belong near $290. Inefficient multiple expansion will eventually correct itself.)

The Yahoo arbitrage could see YHOO increase 3-5x current market valuation.  Now, if only the chart can see another proper consolidation. (Looking for the 10sma on the weekly.)