A long-term thesis trading IBM was that the stock would eventually see trailing multiple equivalent to the market due to the company's consistent performance and investor friendly financial engineering. The Q3 report is servicing me up some crow.

The Q2 report started to merit caution to the multiple expanding thesis, as well as the breaking of the 100sma on the weekly, needed a solid Q3 report to regain confidence in the above thesis.  Unfortunately Q3 was not the catalyst as the relative weakness in emerging markets (aka "growth" markets) did not boost revenue enough.

Some other bear thoughts included:

2. Lack of revenue growth. (There really is no sugar coating this one. Although much of the weakness came from hardware sales, and earnings were made up for in services.) 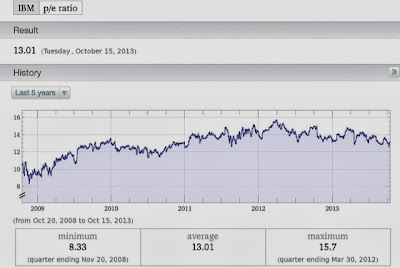 IBM has been maintaining their EPS expectations. If IBM does see a similar trailing multiple, the stock price can see a price range of 168 - 180.

Technically, the stock seems to be nearing oversold support territory. After breaking the 100sma, the stock is now 10% below the sma. (Also a bunch of horizontal support throughout this area. 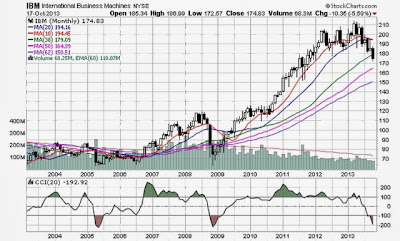