The daily SMAs that were resistance have been breeched.

The major resistance of the 10SMA on the weekly was breeched. 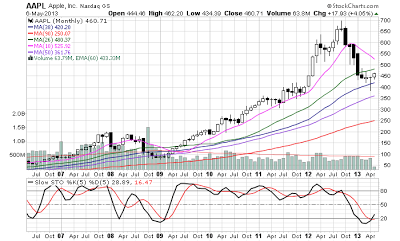 But the last run was also accommodated with an accelerating EPS. Apple is not in that position right now. Instead it has $60B in bids under the stock.

There are still plenty of technical resistance points before Apple approaches its historic trend line (seen in the weekly chart, near the high 500s). And typically, after a major break of resistance, there is some level of consolidation to be expected.  The consolidation maybe near around 430-440.

Not gonna be shy to add during the consolidation. The reasons:

1. IBM is the ultimate stock for financial engineering. Its multiple is near 14. (Prior to the financial collapse it was 16-17.)  Apple has embarked on the largest financial engineering project in history. That alone merits a trailing multiple higher than 10.  If it starts to trade like other well executed financially engineered stocks, its multiple will be higher. (So will its stock.)

2. If you were a business man that owned the most successful and profitable restaurant in NYC, would you sell it for 6 times earnings? Enough said.

3. A nice estimate of high-end addressable market was conducted by Benedict Evans suggesting the remaining size of the market is 1.6 billion, globally.  As a rough estimate (and ignoring re-fresh cycles and a push to 'best-of-breed'), the latest IDC estimate was that Apple controlled about 17% of all smartphone shipments.  Apple controls a much higher portion of the high-end market, but for the sake of conservatism, lets assume the iPhone captures 20% of the 1.6B. Thats about 320M new iphone customers.  Last quarter Apple sold 37.4 million iphones.  Thats about 1.5-to-2yrs worth of growth from new customers remaining.

There is enough growth within the iPhone and financial engineering for Apple to eventually get back to the mid 500 level.

(NOTE: I mention iTV because the change in tone from the cable providers, developments with Aero and the potential that NFLX is proving to every channel provider in the world signals a change-is-coming.  And iTV is a prime staging area.)
Posted by echotoall at 12:44 AM