So a island with about $70 billion in deposits and a default value of $10 billion is going to unravel the countless EU regime changes, heavy austerity measures (already in place) and unlimited ammo via the ECB?

For. Fuck. Sake. Berlusconi is a bigger fear to Europe than Cyprus.

The real tragedy in Cyprus is with the native-hardworking-citizens who's only mistake was to keep their deposits in a Cypriot bank. (Funds in foreign banks are not going to be 'taxed'.)  Many family friends have lost their childhood homes and lands when the international community allowed Turkey to take the northern part of the island with zero punishment/sanctions.  Then to add insult to injury, the citizens who were forced to leave their lands helplessly watched their lands be sold (on the cheap) a few years ago to the very Europeans that are pushing for the deposit tax.

Now any native northern Cypriot left in Cyprus will potentially get an extra tax on their deposits. So yeah, if I were a citizen in Cyprus that had to deal with the above bullshit, I would have two choice words for the international community: FUCK. YOU.

Hopefully the new developments of the bailout right-some-wrongs with the people, but from a financial perspective, the markets have ZERO business fearing Cyprus.

The crisis in Europe was about bank runs, not country defaults.  The interbank lending risk via Cypriot banks (who will be seeing bank runs once they open) simply does not constitute a crisis, let alone a hiccup. The numbers simply do not justify the fear.

If the markets want to use Cyprus as an excuse to sell off, so be it. But my biggest concern isn't "C" for Cyprus, its "C" for China.  I fear a credit shock is brewing.  When only 20% of loan generation is going to new projects, and the rest to rolling over existing debt, the reckoning is a brewing.

The biggest questions are 1. when and 2. the magnitude of the hit?

China has about $4 trillion in reserves it can use to buy it some time. And their banks have limited exposure to western banks. But the effects of the localized shock will dent China's growth, and that will effect the global economy.  The potential credit shock is what makes me question Li's pledge of 7.5% growth until 2020.

The ECB and Fed have removed the black swans from Europe and the US.  If China can keep its target, then that removes its as a black swan.  But that remains to be seen, and the FXI is discounting something.

In the mean time, US jobs data continue to support the US markets will continue its new dynamic.

The SP500 is at a triple top resistance via the monthly chart.

Its time for a break-out. The 10yr yield is very oversold, but still holding its upward trend. If it can hold the trend and bounce, the action would support a market break-out. (Via funds exiting bonds, and entering equities.) 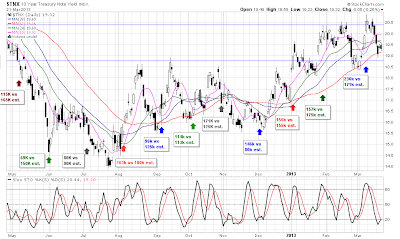 For the trend to break, we would need to see a shock via an escalated fear in Europe (which I will contend is a bullshit fear) or poor economic data begins to surface.
Posted by echotoall at 12:17 AM