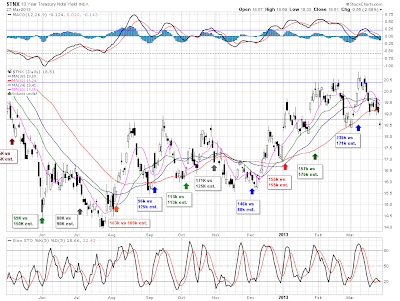 As to the legitimate "why", I do not know. But seeing how the decline was from the AM, the BoE's request for more capital for UK banks most likely was the "why". (Add the expected fear at stupid comments and actions via the EU, and a hedge via treasuries makes the move today plausible.)

Yet, one of the institution that should have been hit the hardest from such news, GS, performed pretty freaken well.

(I was thinking the news on the banks would have caused GS to hit its 70 sma. Been waiting for a re-entry.)

Alas, a weekly view of the 10yr is not as bleak.

The weekly technical is still structurally sound. If US jobs data continues to come in with strength, as it has been doing, we may see a treasury yield bounce off the weekly supports. This too can be a prelude to the SP500 breakout via the monthly.

Posted by echotoall at 1:35 AM