GS, JPM - My thesis on the financials has been very simple and consistent: improved US housing,  EU crisis off the table and a willingness to not have the world end, the banks should not be trading below book.

I like GS for the oversold pop, and may even push toward 130. 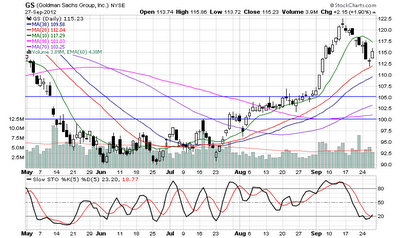 I want to add to JPM, but would like to see it in a greater over sold position.  (The condition will probably take place around 39. Although I currently maintain a position in JPM.) 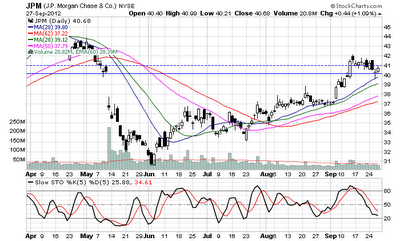 IBM - Its consolidated, and oversold. But its still near its top-line resistance testing its all time highs. I think it will ultimately make new highs, but would rather enter around 202-203. (Although my discipline will probably force me to enter a position on the next down day because the technical position is appealing to me.)

QCOM - This stock has some catching up to do. Many key tech stocks have run up their multiples, however QCOM has yet to really do so. Despite an instrumental position amongst the very names that have run up. Adding to the bullishness, Texas Instruments has bowed out of the smartphone chip race and QCOM introduced chips to solidify a position in the low-end market.  QCOM merits a trailing PE of 20-22.