A word on IBM

IBM is one of the 40 stocks I follow very closely. While listening to Fast Money via the cnbc.com video on demand (great feature), the chartist -Carter Worth- indicated IBM is on the verge of a long-term breakout. His argument was sound, and it was purely technical. Basically it has been consolidating for 10-11yrs, and at its top line resistance with a very low PE.

Understanding the technical analysis is great, but a long-term rally is really driven by fundamentals. Fortunately enough, IBM has them.

There is a major problem in the world. Apparently the world has become too complex. This thesis famously highlighted by the book 'The Black Swan' or the lesser known 'The Age of the Unthinkable'. IBM's growth driver over the next decade or so will be to solve these complexities. The software is risk analytics or predictive modeling or whatever fancy term you want to give it.

The power house in this field, generally speaking, is a privately held company called SAS. SAS has been doing it for a long ass time, but IBM is really making their way. And, imo, the concept is grossly under-utilized. (This concept is a major reason why I really like VRSK. VRSK owns the insurance and mortgage segment, and will render the rating agencies obsolete, at least for the mortgage rating game.)

Between the two companies, if SAS ever went public, I would invest in SAS. But the next best play is IBM, and since IBM is invest able, invest in the trend with IBM.

At the moment IBM is a buy. It is consolidated, and looking to bounce. And with the above info, I am running out of excuses to not purchase the common. 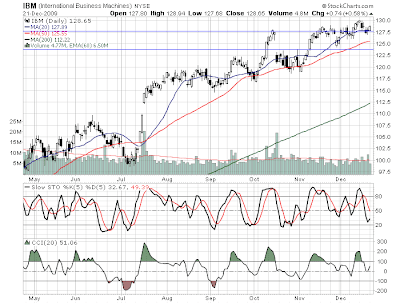 IBM has their hands in a lot of different pies. A reason for their compressed multiple is due to the amount of money coming in from their consulting biz. Once the sales from the tangible growth drivers kick in, IBM should begin to see some multiple expansion along with nice growth.
Posted by echotoall at 8:24 PM