With the market bounce, short-term the market is not giving a solid picture. At the moment it seems stressed, as the SP500 is getting overbought while other indicators are still oversold. Basically this tells me the market needs a solid reason to keep rising in order to remain bullish. 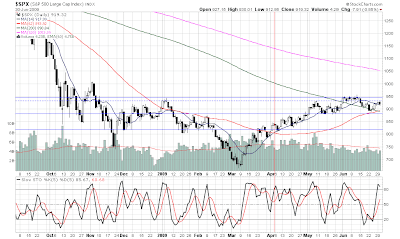 Fundamentally, I do not see where that extra juice will come from to breach the 950 resistance. (We need positive economic data points and good earnings.)

But mid-term, probably after the summer months, the SP500 may very well see the 1000 market.

I get this from a simple pattern... take a look at the previous rally, and its major support.

The 320 SMA is an obvious support, so it should act as a resistance point and where the SP500 will approach to. The SP500 just needs to overcome its first major selling hurdle of the 950 mark (of this rally) before it gets there.

In the mean time, I remain long PWR, BKE, BNI, JPM, FCX, SQM (although the corn report was an ouchy), and wished I was still in F. (I stated I would be easing, and some of my limit orders were achieved.)

The above names I plan on remaining long, in case we do breah 950 sooner, but if not will be looking to add names.
Posted by echotoall at 8:55 PM