Pick a letter... any letter, and define the economy or market via that letter. So there, now your an economist. :)

So the market went down today... so what. IMO, its a good buying opportunity for some stocks. The 950 cap on the SP500 started to break yesterday, and confirmed today. 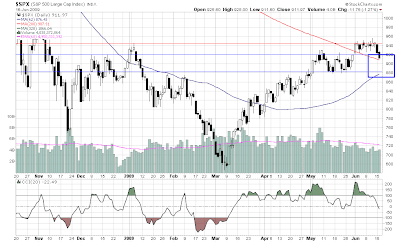 Economically we have stabilized, and the Baltic dry index is still showing signs of activity, and does not merit much fear from this current market consolidation.

The market broke a light support area around the 920 level, but I can care less. I believe the real support is between 900 and 920, especially with the 62 SMA approaching the 900 level.

I was very much cash heavy around 950, made no secret of it as I was acting nimble, and waiting for names to come so I can put cash back to work. This consolidation is allowing me to do that.

Also, a look at the VIX indicates the fear level is becoming a bit over done, with respect to the current level of market stability. There is some room to move up here, which would indicate the market would go down, but the real resistance is between 33-36. The possibility for the vix to rise above 36 and to 40 is present, but, IMO, not likely. Adding support to the market in the low 900s. 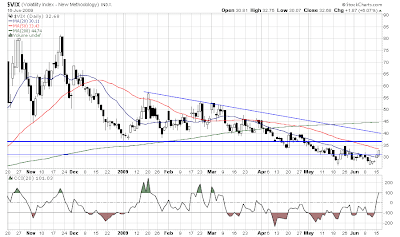