$twtr Moments is engrossing and powerful

Twitter is a $50B company pretending to be an $18B company.
Twitter beat last quarter numbers. They should continue to do the same. Despite the "lack of  scale" chatter. (I mean 10s of 100s of million of people is not scale enough?!? Maybe not in the world of traditional web based advertising, but in a world of native advertising, the numbers so far say it is.) Hopefully now that Jack is permanent, the message will be just as honest but the tone more uplifting.
Twitter is already doing better than Wall Street gives it credit for. Now it has this new medium, which is totally engrossing and can lead to some crazy-awesome truly native advertising.
Moments looks to be at its beginning. Things will start to really heat up when
1. more publishers are on board
2. Categories can be chosen by user
3. More live / major events presented through the moments categories
4. When Moments become a platform for individual or corporate publishers
So where did the $50B number come from? $50Bis my preference of valuation. But that's a "just because" analysis. (Most of the street valuations can be boiled down to "just because".)
Realistically, I use Facebook as a previous comparison for valuation. (The networks do not compare but the way wall street treats them might.)
Back when FB ipo'd, their advertising was that of a chair. A CHAIR! With zero and limited mobile revenue, and a poor html strategy, after the ipo the street punished the stock.

The market cap went as low as $38B, coming off of solid second market valuations. 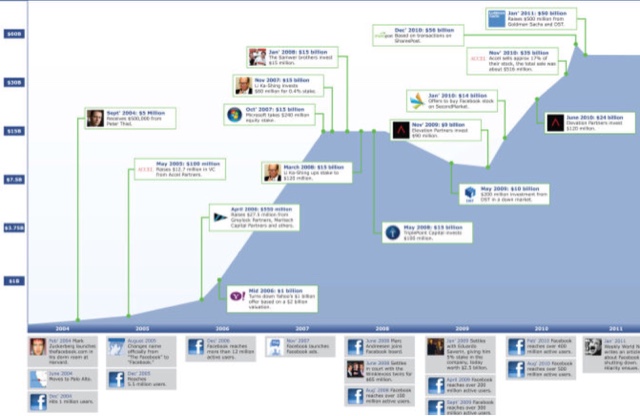 Below is the growth associated with that revenue.