Lossing 29% in a day and a half pretty much says it all with respect to perception. But let's look at the numbers anyway.
Revenue had a different growth characteristic from pervious March quarters. Usually flat to Q4, but this go around it was a noticeable decline. (The guidance adds to the change in characteristic via is a revenue growth deceleration.)

Margin characteristics were slightly better then last quarter, which is what we want to see. 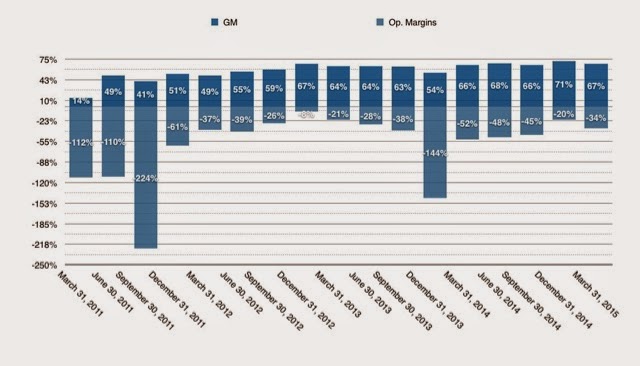 Management tried to justify it but the excuses fell on deaf ears. And rightfully so.
If the current leadership does not know how to utilize the real-time information property, and awesome interest graph, there are others that can.
There is so much that can be done. Twitter partnering with apps to act as a protocol and data sharing. Better discovery within Periscope. Better local Twitter trend discovery. More partnering across properties for the passive user. Or produce an app that is specifically designed for the passive user, that just wants to observe the trends and what the influencers are tweeting. (Have the option to engage in the conversation. Use it as a gate way.)
More needs to be done, and this quarter showed managements lack of execution. If they can not execute, they need to do right with the property and let others who are more capable for this stage of the company.
Posted by echotoall at 11:05 AM